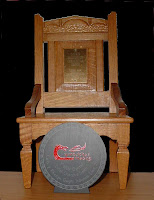 As I mentioned in May, Cwrs Cymraeg Cymdeithas Madog has an eisteddfod - a literary competition in Welsh - at the end of the course each year. The winner of the upper division competition wins the Chair - Cadair Eisteddfod Cymdeithas Madog. It's a traveling prize - he or she has to give it back in time for next year's course - but one much desired. The chair itself stands 14.5 inches tall. Its design is based on that of the chair given at the National Eisteddfod of Wales in 1988, and it was made by the same craftsman, using a piece of oak from a house over 600 years old. This year I won it for the first time, using the bardic name "Hebog". My entry is shown below, followed by a fairly literal translation. There are a few errors in the Welsh, but I have let them stand for now. The round thing in front of the chair in the picture is an engraved piece of slate from North Wales, which carries the name of the course and the year; and this I get to keep.

“He who would lead, let him be a bridge.” Valuable
are the words of the old giant.
Not for a small weak man it is
to carry the burden of being a leader.
Over his own body they will walk
and his red blood will slake their thirst.

A high king one day came
from Ireland, intending
through marrying a pure maiden
to build a bridge over a wide sea.
Brân the Blessed with his sister
made the bridge – he was chief builder.
Beautiful Branwen would be strong,
with her husband she would go home.
But she was a costly sacrifice:
in their bridge there was a weakness.
Almost lost was all their peace:
Efnissien came to the feast.

He broke the weak foundation of their work,
but they were not without hope.
To repair the sick bridge
Brân paid reparation.
Without worries, over the wave
the married pair went to Ireland.
But there persisted, because of that discord,
deep unseen cracks [in the bridge].

Who was it began the rumor
about the payment of the colts?
Who was it compelled the belief
that it was necessary to punish an innocent woman?
He it was who with this lie
broke the realm of Ireland.
But there is blame for the foolish king
because of his mistaken judgment.

Every day a hateful butcher punished
Branwen with a nasty ear-box.
Salt tears on her thin cheek
fell warmly without wailing.
All the ports of the land were closed;
there was no escape from her sorrow.
Under the water, without cry, without wave,
the bridge collapsed soundlessly.

After a time, a message came
to Brân about her slavery.
To the far blue west
he looked, and a blood price
was in his thinking – floods of blood
would pay for his blood relative’s pain.
There was no bridge now – to cross the sea
he would have to be the first-goer,
and walk through the great depths
pulling his heavy-laden boats.

The Irish saw his head
with vengeance on his brow.
Everyone ran with the word
to their king on his chair.
He told them to break down
the bridge over the great-flowing river.
They would be very safe
although they were in bad faith.

How to tell the dark tale
of Ireland and her fate?
When Brân’s army came to the brink
there was no hope for common folk.
Fire, sword, great death,
a huge red disaster.
Only seven men came back
from their blood-flowing battling.

Sad Ireland set out
on her ancient woeful journey:
five women to fill a land;
ages of brother-killing.
Branwen saw what would be;
this sea she could not bridge.
Her strong heart broke in two,
her spirit became a starling.

With living red blood as an offering
a bridge is raised, not stone on heavy stone.
“He who would be head, let him be a bridge,” said
the old giant; he was blameless.
Brân became a bridge gladly;
Only his head came home.

Too much going on last weekend to get a blog post up, and next weekend will be no better. I've done another half chapter on The Ash Spear, which is hanging fire while I do a little research, but I've been too busy to do the reading... The second half of July will be quieter, and then I hope to get more writing (and blogging) done. I also want to start doing random book reviews again... check here or on my amazon profile for ones I've done in the past.