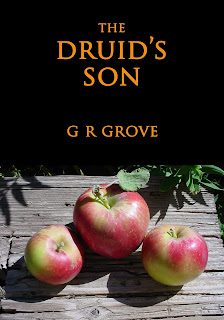 The four books (so far) of my Storyteller series relate the continuing adventures of one sixth-century first-person Welsh narrator, Gwernin Kyuarwyd. The series has however generated two stand-alone spin-offs, both in third person narration.

The first of these, The Druid's Son, is set five hundred years before the Storyteller books, but derives from an interior story in the third of them, The Ash Spear. Recited in a king's court by Gwernin's teacher, the old bard Talhaearn, it tells the story of the destruction of the Druid sanctuaries on Ynys Mon (Anglesey) by the invading Roman army, and the fate of the last British Archdruid. The Druid's Son was my original title for the fourth Storyteller book, in which Gwernin goes to Ireland in search of the fate of that last Archdruid's son, but as I proceeded, I realized that I needed to go back and create his story before I painted myself into a corner, so to speak, by adding bits haphazardly. In the end, that book stole my title and a year or more of my writing time, so when I finally got back to Gwernin, I needed a new title -- The Fallen Stones.

My second spin-off also came from Gwernin's Irish adventures, and concerns another Druid. As I explained in the afterword to The King's Druid, Fráechán mac Tenusán, who appears as a major character in The Fallen Stones, was actually an historical person, albeit one minimally attested. He is mentioned in the Chronicles of Ireland as having made the “druidical fence” for Díarmait mac Cerbaill at the battle of Cul Dreimne, which Díarmait lost due to “the prayers of Colum Cille” and the opposing spell of Tuatán mac Dimmán. I reasoned that if he was acting as Díarmait’s Druid or magician then, he was probably also involved in Díarmait’s pagan “last feast of Tara”, which was held the previous year. I wondered what his life and training could have been like, to make him what he was when Gwernin met him. The King's Druid is the result.

I'm currently working on Gwernin's fifth book, provisionally titled The Old Gods Endure. Will there be more spin-offs in the future? I didn't plan the last two, but it seems possible. I go where the awen takes me!