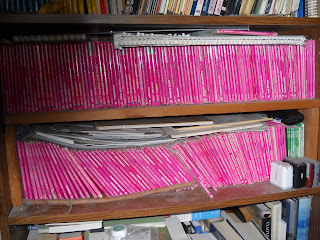 Writing about Gwernin Storyteller's travels requires detail. In the days before internet resources were available, I acquired topographic maps for approximately 80% of Britain, and still use them. Although I have visited most of the places I write about, some of those visits were over twenty years ago, and looking at the maps helps me remember them. Moreover, I have to image what those places would have been like in the 6th century! Nowadays, however, I do use Google maps to compute distances when figuring out how far Gwernin and his friends could ride (in a leisurely fashion) in a day.

My Storyteller books are in some ways travelogues, following Gwernin Storyteller on a season's wanderings. The chapter titles reflect this, although not always in the way one would expect. The first book, with its short chapters and two-part organization, is somewhat of an exception. The first half - "A Circuit Around Wales" - follows the usual spring-to-fall pattern and reflects a journey I had just made myself. In the second half of the book - "Winter in the Hills" - Gwernin has settled down for the winter with his teacher, and character development had to take the place of travel descriptions. I did not know, by the way, that I was writing a novel at that point, never mind the first of a series of novels - I thought I was writing a connected series of short pieces for a local newsletter. As things went on, however, I learned differently.

A year and a half since I posted here, and almost a year since I finished my following book, "The King's Druid". Both books are available on Amazon and from Lulu and other sites (hint: I get substantially more money from Lulu purchases). The ebooks for "The Fallen Stones" and "The King's Druid" are now available from Smashwords and other distribution sites, but probably won't be on Amazon. And I've started work again on the next Storyteller book, tentatively titled "The Old Gods Endure".