Another page written yesterday, and three more today. Not much momentum yet, but better than I have done in some while. I stayed at home today, gardened, read, and wrote. The weather was a bit cooler than yesterday, which helped: hard to imagine a cool, wet day in Ireland when it's this hot and dry.

Lots of squash and tomatoes, and the apples are getting ripe: time to make chutney, as soon as I get a cool enough evening. Summer's passing: almost September, and the days are visibly shorter since Lammas. Maybe a month left for the garden, if I'm lucky, before the first frost.

New review of Flight of the Hawk on LibaryThing.com.
Posted by G R Grove at 8:41 AM No comments:

Email ThisBlogThis!Share to TwitterShare to FacebookShare to Pinterest
Labels: flight of the hawk, reviews

No actual writing done over the weekend, but a good bit of research. I've been rereading A guide to early Irish law and Early Irish farming, both full of useful details and more entertaining to read than one might think. Pretty soon I'll have to just start putting words together again, and see where it leads me.
Posted by G R Grove at 11:48 AM No comments:

Mist on the Mountains... 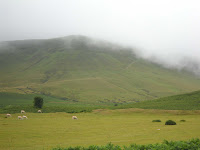 The Black Mountains again, on a different day. It would be easy to get lost if that cloud came a little lower.
Posted by G R Grove at 8:55 PM No comments: 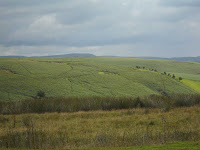 I'll look up the details later on the map, but this one is looking north from a Roman and later medieval road.
Posted by G R Grove at 7:10 PM No comments:

Although this one is in England... 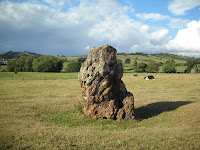 One of the stones in the biggest circle at Stanton Drew, about 15 miles east of Bristol Airport. The black and white object in the middle distance is a guardian cow.

...and I actually got some work done on #4 during the hours on the plane. Continental now has power outlets under the seats, which is brilliant - no battery worries! I added a page to the current chapter, changed its title, and now feel I'm back on track. If only I didn't have to go back to the Day Job tomorrow... oh well.

The first week in Wales I spent in Caerdydd, on a Welsh language course. Tutor was good, and I feel I made real progress (I'm in the nearly-fluent level). We finished up the week at the National Eisteddfod, where I bought - surprise! - a few books. The second week I wandered around, partly in England (Gloucestershire) and partly in Wales (Black Mountains), researching sites for #5. This was out of order, but since I had the opportunity to take the language course in Wales with a group I usually join every other year in North America, I couldn't resist. However, I'm glad to get back to work on the Irish book. I've changed the trilogy name slightly, from Gwernin's Quest to Gwernin's Quests, as I think this middle trilogy is not so closely linked as one quest would imply.