Winter has come back... 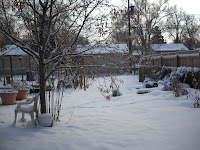 ...and brought trouble with it. After a fairly mild and dry January, February in Colorado is being its usual snowy, cold self. It's been snowing on and off for about three days now - not hard, but persistently. That wouldn't be so bad, but this morning my furnace died. Had the repairman in, at weekend rates, but no luck. At least they've offered to waive the call-out fee since they'll be doing the replacement. In the meantime, three electric heaters and two canning kettles of water boiling on the stove are keeping things fairly warm. The estimator will come by first thing in the morning.

Estrella War, which I mentioned in my last post, was good this year, if not especially profitable from the bookselling point of view. We spent some evenings with a bardic friend, wandering the camps, participating in a competition Friday night (where I came second in the spoken word category with a story) and finishing Saturday night at our own fire with the Outlands Bardic - a circle this year, not a competition. Cold nights but dry, which is important. And a catchphrase from our friend Dolan: "A bored Calontiri is a dangerous Calontiri." But possibly not as dangerous as three caffeine-charged bards.

No writing this week, but I continue to research Druids and Ireland.
Posted by G R Grove at 7:19 PM No comments:

Where does the time go? Well, last week it went to Arizona, where we attended Estrella War... several days of primitive camping in the Arizona desert with several thousand other people. This year it didn't rain, thank the Gods!

Life has been a little distracting lately, but I'm still busy researching Ireland. Currently reading Gods and Fighting Men, a collection of stories about the Tuatha De Danaan and the Fianna. All these translations/retellings leave out or emphasize different parts of the stories, so reading several versions is a good idea. This one is also notable for bringing a lot of the sentence structures of the original Irish into the English.
Posted by G R Grove at 8:48 AM No comments: