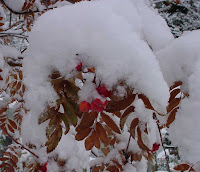 Welsh in the workplace

An interesting article about the legal rights of the Welsh to use Welsh in the workplace.
Posted by G R Grove at 1:45 PM No comments:

Email ThisBlogThis!Share to TwitterShare to FacebookShare to Pinterest
Labels: Welsh

A new review for "Flight of the Hawk"

This evening I wandered by Odyssey Reviews and was delighted to find a new review for Flight of the Hawk. Take a look, and also see what she had to say about Storyteller last year.

Email ThisBlogThis!Share to TwitterShare to FacebookShare to Pinterest
Labels: flight of the hawk, reviews, Storyteller

Mae heddiw yn ddydd dim yn gynnes, dim yn oer iawn -- dydd mwyn a sych. Y bore 'ma roeddwn i'n meddwl am y llyfr newydd -- yn arbennig, ble dylai'r stori fynd yn nesaf. Mae'r llyfr yn cwympo yn fras yn dair rhan -- rhannau y gwanwyn, yr haf, a'r hydref. Pan dechrais i, roedd gen i syniad cyfredinol am beth fyddai'n digwedd, ond heb lawer o fanylion. Roedd y rhan fwyaf rhan y gwanwyn yn syndod i mi, ond dyma beth sy'n digwydd pan mae Neirin yn y stori! Roedd gen i syniad am beth dylai digwydd yn rhan yr haf, a dw i wedi ysgrifennu mwy na hanner ohono ar hyn o bryd. A mae gen i syniad da beth fydd yn digwydd yn rhan y hydref. Ond dw i wedi bod yn sylweddoli yn ddiweddar bod un neu dwy broblem mynd o rhan yr haf i rhan y hydref. Treulias i'r bore yn meddwl am y pethau hyn. Gobeithio dw i wedi eu datrys nhw nawr!
------------------------------------------------
Today is neither warm nor very cold - a mild, dry day. This morning I was thinking about the new book -- in particular, where the story should go next. The book falls roughly in three parts -- spring, summer, and autumn. When I started, I had a general idea of what would happen, but without much detail. The greater part of the spring section was a surprise to me, but this is what happens when Neirin is in the story! I had an idea what should happen in the summer section, and I have written more than half of that now. And I have a good idea what will happen in the autumn section. But I have been realizing lately that there are one or two problems going from the summer section to the autumn. I spent the morning thinking about these things. Hopefully I have solved them now! 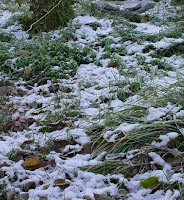 Mi gawson ni ein eira cyntaf ddoe - yn hwyr iawn am eira cyntaf yn Denver. Gawson ni tua modfedd, a mae'r rhan mwyaf wedi adael nawr - dim ond tipyn bach ar ol yn y cysgodion. Ond mae hi'n arwydd arall bod y gaeaf wedi cyrraedd. Mae pob y nosau yn hir ac yn rhewllyd, ac os cawn ni ddydd cynnes, bydd acos mae mwy o dywyll oer yn dod. A dyma fi yn ceisio ysgrifennu am yr haf...
---------------------------------------
We got our first snow yesterday - very late for a first snow in Denver. We got about an inch, and most of it has gone now - only a little bit left in the shadows. But it's another sign that winter has arrived. All the nights are long and frosty, and if we get a warm day, it will be because more cold weather is coming. And here am I trying to write about summer...

This past weekend I gave a presentation on Dafydd ap Gwilym for a group, and thought I would put up a list of selected references here.

Dafydd ap Gwilym: Poems edited and translated by Rachel Bromwich. This is so far as I know the only bilingual edition which exists, with Welsh/English facing pages of the poems and Bromwich's translations. Its annoying features are that it does not include the full cannon, and the poems included are grouped by topics, making it (for me) harder to find a specific poem.

Dafydd ap Gwilym: his poems by Gwyn Thomas. A relatively brief introduction followed by annotated English translations of the complete poems in the order followed by Parry's Welsh edition. No Welsh except as examples in the introduction. Amazon lists this as not yet available; their link appears to be a reprinting of the 2001 edition I have.

Gwaith Dafydd Ap Gwilym edited by Thomas Parry. This is the standard Welsh edition (no English).

Aspects of the Poetry of Dafydd ap Gwilym: Collected Papers by Rachel Bromwich. A collection of articles by Bromwich on Dafydd and his poetry.

These are the books I would recommend to someone seriously interested in Dafydd's work. In addition there a number of other translations of selected poems, either by themselves or in anthologies. If there's interest I could list these in another post. 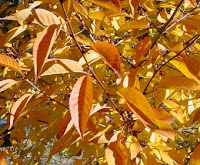 --------------------------------------
Last weekend, the leaves of the cherry tree were burning as flame-red and gold as fire in the sunshine, but today they are gone, blown away on the wind. We've had a lot of wind this week, cold wind, and the mountains got snow. Tuesday the "chain law" was in effect in the high passes because of the snow. But we haven't had snow yet in Denver. It's good that the leaves are gone - there won't be much tree damage when the snow arrives at last. But the garden is a little darker for their going.

I finished another chapter last week - the numbers are on the "sidebar" as usual.

Today I'm taking a break from my bilingual blogging to post another excerpt from Storyteller - this time from the afterword, in response to a question about sources. Fear not (or fear?), my bilingual approach will be back later in the week...
---------------------------------
The 6th century in Britain is in some ways the darkest part of the European Dark Ages. As direct evidence of people and events in this period, we have a handful of poems, a few historical references in accounts written 200 years or more later, and a set of genealogies of doubtful value. In addition, there is a growing body of archaeological material, some of which contradicts (or at least fails to support) the above sources. In attempting to write a series of somewhat historical stories based in this period, the prospective author must leap from rock to rock, occasionally walking on water in between. Inevitably there will be some splashes.

For those who care about such details, then, the following summary is provided. Actual physical locations (i.e., towns, forts, roads, etc.) are based on archaeological reports where available, but details (buildings, general appearance) of these places at the time of the story are speculative or wholly invented. Territorial units such as kingdoms fall in this category as well; there are no maps of Wales or of the lands of the Men of the North from the 6th century. Most of the kings or princes are at best names in a poem, history, or genealogy, and their characters (to say nothing of their appearances) are largely inferred from their reported actions. Five of the more important bards are listed (as names only) in Historia Britannica; from two of them — Taliesin and Neirin (later called Aneirin)—we have poetry as well, although the degree to which these poems may have mutated during oral transmission is debatable. This poetry, incidentally, provides a large amount of the detail for material and social culture in the courts of the time.

Finally, a word on the magical or supernatural element in some of these stories. Many of the "supernatural" characters encountered by Gwernin, especially in the first part of this book, derive from the collection of Welsh medieval tales called the Mabinogion, and especially the section called the Four Branches. In a time and place where there was no clearly perceived distinction between spirit world and "real" world, I submit that these characters would have seemed, to a person in touch with their stories, to have as much "reality" as many of the "historical" ones. Indeed, so I have found it myself on some of my own journeys through Britain, over 1400 years later.

For the last week I have been reading about another famous Welshman – Dafydd ap Gwilym. Dafydd was the most famous Welsh poet of the 14th century – after Taliesin and Aneirin, the most famous poet in Welsh history. He was the greatest master of the form of poetry called the cywydd. If it weren’t impossible to translate him, he would possibly be as famous as Chaucer, who lived in the same century. I have been reading about Dafydd because I will be giving a talk about him next weekend – but that is a story for another day.