Bards and the Law of Hywel 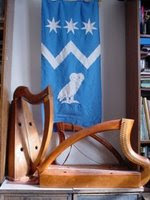 There are three classes of bard mentioned in the Law of Hywel: the pencerdd, or master bard; the bardd teulu, or bard of the household; and the cerddor, or singer. The Law has a good bit to say about the first two, and rather less about the third, but much of it is intermingled with other material and must be separated out by the curious reader. This post will be about the pencerdd; I will take up the other two classes of bards later.

The pencerdd (pronounced pen-kerth) or master bard is defined as "the bard when he wins a chair," i.e., a bardic competition. His seat in the court is next to the court justice, and his lodging with the edling, or King's heir. He is one of the fourteen persons who have chairs in court. He sings first at the feasting, and sings two songs: one praising God, and one praising the King. He pays no fees to the King for his land, but rather receives payments from others: twenty-four pence from each of his pupils when he leaves the master's instruction, and twenty-four pence from every maiden when she marries.

In addition, the pencerdd can solicit, or receive payment, from those for whom or about whom he sings, and that without competition: "No bard can solicit for anything within his pencerdd area, without his permission, unless he is a bard from a strange country. Even if the King forbids the giving of goods within his realm until the end of a period, the pencerdd will be free of the law." Moreover, "from what he and his companions gain together he is entitled to have two shares." With all of this, it is clear why the pencerdd's Irish equivalent was described as one of three whose wealth could not be measured.

The pencerdd's harp is valued at six score pence, and its tuning-horn at twenty-four pence, the same as the King's harp. (A nobleman's harp, in contrast, is valued at sixty pence.)