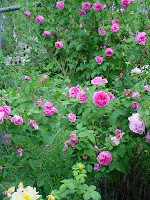 The pink rose is almost finished blooming - this picture was taken a couple of weeks ago - and most things have been growing like mad, helped along by one of the wettest Junes in recent memory. I keep wanting to take more pictures before posting, but the weather hasn't cooperated. Hopefully more soon.

I'm still waiting for Amazon to upload the data for The Ash Spear. Unfortunately they only do this once a month, so it could be another three weeks. Trust me, I'll publicize it widely when it happens.

I've also started working on the next book. This one will be set five or six years after The Ash Spear, and will involve several of the same characters. Gwernin of course will be back as the narrator, and also Taliesin. I don't think Neirin will appear in this one unless it's a cameo, but he'll be back again in later books. There will also be a few glimpses of other people we've met before. Right now I'm doing background research (did I mention this one will be mostly set in Ireland?) and thinking about major plot elements. I've also written a couple of sentences of the first scene. I want to design the book as a second entry point into the series, something people can enjoy who haven't read the first trilogy. That's the idea, anyway. Oh, and the working title is The Druid's Son.