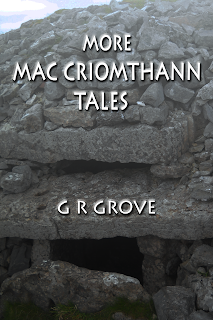 Haven't done much writing this week because it's been too hot. However, I've finalized my second collection of Mac Criomthann tales on Smashwords. It's officially published on September 1st, but here is a pre-sale link:

There are 5 stories in this collection. Three of the tales and one in its predecessor appear as interior stories in the fourth Storyteller book, The Fallen Stones, but two of the others are new. There will be more.

Many are the tales which were once told of the Druid called Mac Criomthann and the adventures which befell him in the years he wandered Ireland. For it was not a man of Ériu that he was, but a Briton, and how he came by his name and his nature in that great island I have told elsewhere. Most of his tales are lost now, or attributed to other heroes and magicians, but these few I have salvaged. I heard them once from an ancient Storyteller, long ago in a distant land. Now I share them with you here…